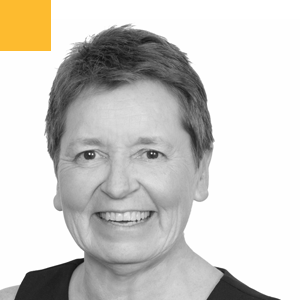 Jacqueline (Jackie) Foord has spent much of her life pursuing social justice and advocating for the equal application of human rights. Until recently she was the Chief Executive Officer of YWCA Edmonton.  She received her Bachelor degree in Political Science from the University of Regina and her MBA from Athabasca University. Jackie has over 25 years of experience in senior leadership positions in the non-profit sector. She served as Chief of Staff for the Official Opposition at the Alberta Legislature and worked in the health care sector as an administrator at St. Joseph’s Auxiliary Hospital.  She is currently serving as the Branch Manager, Social Development for the City of Edmonton.

Jackie devotes considerable time to volunteerism.  She is a member of the International Women’s Forum and was the inaugural Chair of the Women’s Advocacy Voice of Edmonton (WAVE) which is the committee that advises city council on issues related to gender.  Jackie is the President of the GoodHearts Transplant Foundation and is a Board Member of KidSport Edmonton.  In 2013 Jackie was named one of Edmonton’s Top 100 Women in Business and in 2014 she received the Lifetime Achievement Award from the Edmonton Pride Festival Society.