While the Edmonton Public Library and Canadian Native Friendship Centre have been partnering on Cree language classes for years, shifting the classes online during the pandemic has resulted in an explosion of interest in the program.

“When Covid hit and we shut down the library branches and started offering virtual classes,  demand for it increased because it was so accessible online,” says Andrew Halbertstadt, Manager of the Londonderry and McConachie branches of the Edmonton Public Library. “Attendance and registration skyrocketed. We started getting people attending from all over the place.”

Because of the increased demand, a second class was added.

While registration for each class maxes out at 50, new students are still being welcomed from the waiting list, as not everyone who registers for the sessions always ends up attending.

The classes run from October to May, but new students are welcome to join at any time.

“I’ve been letting people in each week since October from the wait list. Not everyone ends up attending but the attendance ratio is still quite high compared to other classes we offer,” says Andrew. “People are committed, which is great to see.”

While joining mid-season can present some extra challenges, students who join late often do quite well if they persevere, because of the higher level of immersion in the language.

“We keep it open because we want it to be as inclusive as possible,” says Andrew.

Because the Cree classes have been so well received, the Canadian Native Friendship Centre and EPL are partnering to offer Stoney language classes as well.

Leslie Skinner has been teaching the Cree classes for nearly 9 years, after attending them himself to regain his language.

He aims to create a community among the students, as well as preserve the language and the traditional knowledge it holds.

“One thing about our language is it’s kinship based,” he says. “So in the class, part of our goal is to build a bit of kinship and community as we’re learning. We try to make it a welcoming environment because we’re trying to build that community in learning.”

The culture itself is embedded in the language, as well as knowledge about how to live on the land in a traditional way.

Even in a simple thing like a place name, like Grande Prairie, or maskotêw (ᒪᐢᑯᑌᐤ)  in Cree, means ‘a prairie that was created by fire.’ From that name, we know we used to do prescribed burning,” says Leslie. “So there’s knowledge like that in the language.”

Other examples include exceptionally specific words for tracking, hunting, tanning, or assessing what kinds of trees provide wood that is easier to work with.

In addition to survival skills and land stewardship, the language contains the values of the culture, and how to live together in a healthy way.

“There’s knowledge in the language about how we treat each other, our traditional way of life, our kinship with the rest of creation,” he says. “The language is more adapted to the land, it orients you more to the land. It’s not that you learn the language and then learn about the land, they happen together and feed into each other.”

“For non-native people, it’s important to the survival of the language because in order for the language to survive we have to be able to speak it in our day to day lives,” he says. “And If you want to get an understanding of who native people are, how we treat each other, and get to know us, language is the deepest way you can do that.”

For more information about Cree classes, or to register, click here. 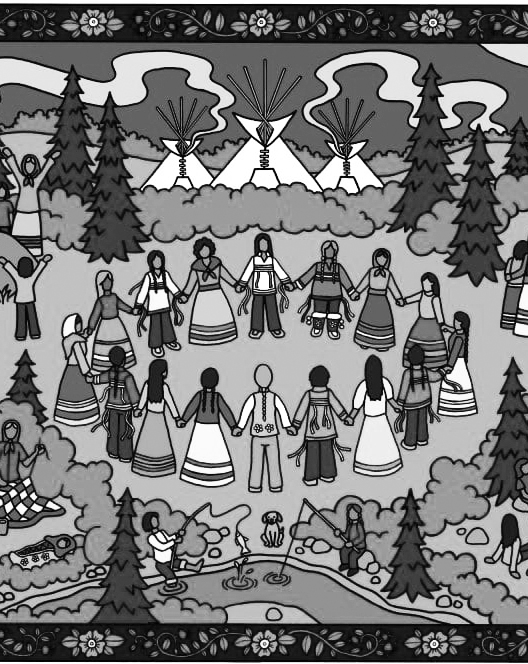