‘These services are saving lives’: Rainbow Refuge a lifeline for LGBTQ refugees

The refugee’s journey to a new life in Canada is often complicated, difficult and challenging in many ways. But LGBTQ refugees face a lot of additional, specific barriers to a new beginning in a new country.

Basel Abou Hamrah  came to Canada as a refugee from Syria in 2015, and faced these barriers firsthand.

“I wanted to be connected to the LGBTQ community but I didn’t know how,” says Basel.

When he walked into the Edmonton Mennonite Centre for Newcomers (EMCN) he saw signs of hope.

“I saw rainbow flags at the door and was happy with that, but didn’t know to whom I should speak,” he says. “Sara, who had an office beside my classroom, I saw she had rainbow flags on her desk, so I thought maybe I should talk to her. One day I said, I love this rainbow flag at your desk, and she said she was thinking of taking it off and I said no please don’t do that and I came out to her.”

Sara Buczynski is a Settlement Practitioner at EMCN, who now works specifically in the area of LGBTQ outreach.

“When I started at EMCN I decided I would be out and already had started talking about newcomer LGBTQ issues. I was getting different clients identified needing support."

"Management was interested in supporting it but didn't know what the need was,” says Sara. “In Edmonton, none of the settlement agencies were offering LGBTQ services and support.”

Basel was able to offer insight to the LGBTQ refugee experience.

“I didn’t feel safe going to the Pride centre because what if someone from my ethnic community saw me go in there? Sara introduced me to other Syrian persons and it turned out there are no services for us, no place for us here in Edmonton, a space for LGBTQ newcomers,” says Basel.

“In Turkey, there was a group for Syrian LGBTQ refugees called Tea & Talk. They support each other like a family.”

He wanted to see something similar created in Edmonton.

“Sara came on board and we started the LGBTQ newcomer group in May 2017,” says Basel.

“Since then, we've been meeting weekly, including holidays, every Friday night. We celebrate Christmas Day together, we celebrate New Years together. The idea of this group is we are a family for each other. We're a chosen family. We need to be together on each holiday.”

The group quickly grew from six people at the first meeting to more than 140 members.

Basel now offers refugee-specific services to refugees from inside the Pride Centre of Edmonton and EMCN.

“I felt uncomfortable coming out in the newcomer community and I also didn’t feel welcome at an LGBTQ agency. Many LGBTQ services don’t have the knowledge to help the newcomers with their specific issues,” says Basel. “We realized there are a lot of needs in the community that we cannot solve in the social group time. We realized that’s over our capacity. So the Pride Centre and EMCN came together and they started the Rainbow Refuge program in October 2017.”

Since its inception, Rainbow Refuge has grown to address the specific needs of the LGBTQ refugee community.

“Now, there are settlement services, support with immigration processes, it’s a whole program,” says Basel. “ We offer support with employment referrals, mental health, and the Newcomer Group is still there for social support.”

“Some people feel comfortable approaching a newcomer agency, some the Pride Centre,” says Sara. “So depending on the individual, there are now multiple entry points.”

While this issue is common across Canada, Edmonton’s service providers are taking a leading role in addressing them.

“Organizations in most cities now see the need and they are working on it,” says Basel. “I think this is a unique partnership.”

Being able to connect with someone who has been through the LGBTQ refugee’s specific experience is meaningful to those wrestling with the challenges it brings.

“I think it’s so important there’s lived experience here, LGBTQ and newcomer in one person, delivering the service,” says Basel.

With funding from the Edmonton Community Foundation and Immigrants Refugees and Citizenship Canada (IRCC), the two full-time positions ensure that refugee claimants who don’t yet have Permanent Resident numbers are able to receive help with the process of showing that returning to their home countries will put them at risk.

“Before, a lot of claimants were being refused by the refugee board because the process can be very complicated,” says Sara. “They need to prove they would be in danger if they went back.”

This piece of the work is specifically funded by the Edmonton Community Foundation until December of 2021. This service doesn’t fall under any specific government responsibility, and so is not included in the five-year funding agreement with IRCC. Because of this, Rainbow Refuge is currently seeking sustainable funding options for this life-saving work.

“Before, they had to do this on their own, and less than 50% of applicants were approved,” says Sara. “We have a 98% approval rate now. These services are saving lives. This is an essential service.”

Sara and Basel emphasize that this part of the work is one of the most important pieces of resettling LGBTQ refugees in Canada.

“This period, before they have a permanent residency, is when they’re the most vulnerable,” says Sara. “It’s a critical time for getting established in Canada.”

Basel says he is certain this program is changing lives.

“Every day we realize how this program is very important to our community,” he says. “In the beginning, it was more about community connection but then we realized there are many needs that have never been addressed for the LGBTQ newcomer community. Doing this work made us realize those needs, so every day we appreciate that we have this program, but we need funds to continue this program.”

They are certain the social support aspect of the program will continue, regardless of funding issues around the refugee claimant process.

“I think we will continue to grow. We’ll support more and more people,” say Basell. "It’s a pleasure for us to see our group members. They are thriving, they’re achieving great things.” 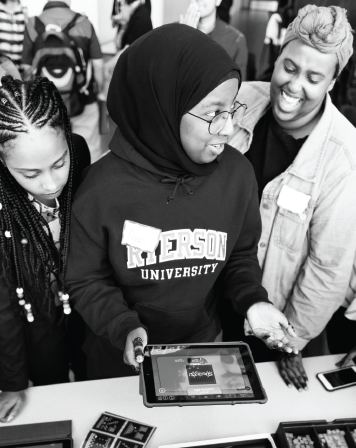