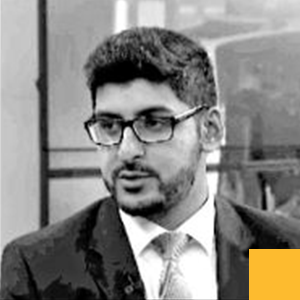 Adil Hasan is Vice President and Chief Operations Officer for Hasco Development Corporation. Previously, he has served as Project Manager at Saba Homes.

His volunteer experience in the community is vast. He currently serves as Vice President, Civic Engagement for the Alberta Muslim Public Affairs Council and Co-Founder/Secretary-Treasurer of the Al-Mustafa Academy and Humanitarian Society. He has written for the Canadian Muslim News and served as Communication Director for the Edmonton Council of Muslim Communities.

A politically active citizen, Hasan has worked with Alberta Together, Stephen Mandel’s leadership campaign, Mayor Don Iveson’s Leadership Campaign and was President of the Edmonton Southwest Progressive Conservative Association for five years. He has also served as Community Outreach Advisor and Youth Imam at Markaz Ul-Islam and was the Co-Founder and Student Imam for Tempo School Council. An award-winning athlete, Hasan has achievements in tennis and ice hockey.