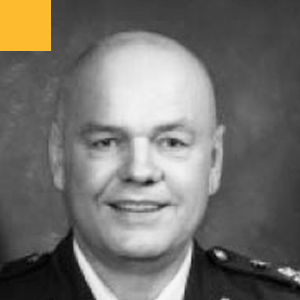 On February 1, 2019, Dale McFee was sworn in as Edmonton’s 23rd Chief of Police for the Edmonton Police Service.

Chief McFee has an extensive background in policing , including 26 years as a police officer in Prince Albert, Saskatchewan (nine years as Chief of Police) and six years as the Deputy Minister of Corrections and Policing in the Ministry of Justice for the Saskatchewan government.

Chief McFee has received several commendations in his areas of expertise, including the appointment and subsequent promotion by the Governor General of Canada to the Officer of the Order of Merit of the Police Forces. He is a recognized Governor General Leadership alumnus, former citizen of the year within his home community, and the recipient of a provincial policing leadership award for “Leadership in Multi-Agency Community Mobilization”.

In addition to his extensive policing background, Dale has considerable experience managing small- to mid-size businesses, and has lectured nationally and internationally on the topics of leadership and change management in private and public sector organizations. Chief McFee speaks with first-hand knowledge and expertise about policing, community engagement, data and analytics, social finance and impact investing. He is a former member of Entrepreneurs International and served in the capacity of moderator for groups of business leaders within Saskatchewan.

Dale is married with three daughters and is an active member in his community. He has considerable Board experience including three years as a member of the Parkland Health Board. He is the Past President and current Director of the Western Hockey League’s Prince Albert Raiders.