On Christmas Day, while many offices in Edmonton’s downtown are shut for the holidays, one unit on Jasper Avenue is the site of a unique family gathering.

OUTpost, a drop-in centre for vulnerable LGBTQ2S+ youth created by The Community Health Empowerment & Wellness (C.H.E.W) Project, opened in late 2019 and has already made its mark on many young lives.

But just an office wasn’t enough to meet the needs of youth facing multiple barriers to essential services and resources.

“They said: Corey we need something different. We need a place we can go,” Corey recalls.

Corey knew his office was too small to meet their needs.

“So, I Sat them down and said: tell me what you want? If I had a magic wand. What would you ask for?”

Their requests were simple, but essential. A place to play video games, to shower, to eat, to sleep.

After that, things started to fall into place.

“I was walking and there was a lease sign on Jasper Avenue that had been there a few years,” Corey recalls. “We didn’t have the money at that time,  but I said, ‘I‘m gonna check this out’.”

“The landlord was amazing and dropped the rent in half for us. So I said, well, I’ll do GoFundMe campaign,” he says. “In three days we raised $40,000. It was pretty incredible the amount of support we got to do this, to give these people a place to call home and a family.”

Beyond just a street family, OUTpost has created a family environment connected to the larger community.

“Edmontonians just rallied to bring us cookies and toilet paper and, especially during the start of Covid-19, people still kept giving,” says Corey.

“I’ve received hundreds of messages saying ‘wow, we didn’t know these kids were out there’.”

“When we start telling that story, there’s a lot of power in that,” he says. “People started seeing these kids and that’s amazing.”

As with many non-profits, funding is an ongoing concern.

“We are thriving, but the challenges are of course how do we get the money to stay open,” says Corey.

An essential part of serving these youth is ensuring they have a voice. OUTpost is their space.

“The main thing is the youth always have a say in the things that we do,” says Corey. “For once they have a voice in what goes on in their lives.”

The space has been transformed from an office to a home.

“It really does look like you’re looking into someone’s living room,” Corey says. “There’s just a lot of really good things that cause hope and this population in particular didn’t have a lot of hope. It was so easy to do.”

“We always look for the big things, but somewhere to sleep during the day, clean socks a shower. These are things we take for granted,” he says. “Part of our mission then is we have to provide that hope that people aren’t getting.”

CHEW research shows that the barriers the youth are facing are often small but devastating.

“Only 40% have access to clean drinking water – a lot of time we think we can just go use the water fountain or washroom but often security won’t even let them in the mall,” he says.

Youth will often be denied a glass of water in a fast-food restaurant, because of the way they look.

At OUTpost, youth are treated as family members, with a right to be there, not guests.

“They can eat as much as they want, shower, do laundry, clean clothes. It’s just amazing how those little things turn into a big thing,” says Corey. “We’ve seen the most rugged youth smiling again, happy, thinking ‘maybe I’ll get off the street, back to school, get a job’.”

Once they have that stability, they start to hope for something beyond the chaos on the street,” he says. “We’re like a sanctuary.”

Many of the youth OUTpost serves have been kicked out of their homes after coming out to their families, some as young as 12 years old.

“A lot of the youth call this place home,” says Corey. “One of the biggest challenges though is we still have to send the youth out at night because we’re not an overnight shelter. My hope is to expand that capacity.”

Homophobia and transphobia plays a large role in this challenge. Most youth don’t feel safe checking into a regular shelter, Corey says,.

“They often do what they have to, to survive: steal, engage in survival sex, they just do what they can to survive, these are kids,” he says. “Queer and trans kids are just wandering around because they have nowhere to go. We shouldn’t have these kids sleeping outside. We have to do more.”

While there are still gaps in overnight services, these youth now have a place to go, during the day, where they can be themselves and they have family.

“It’s hard to put into words but when you come into this space you just see what that hope can do,” Says Corey. “We cry a lot around here because there’s so many beautiful things.”

Christmas Day is one of those days that highlights the importance of a family and a space to gather.

“At Christmas – everyone got presents with their names on them,” Corey says. “One fella opened his present and started getting teary, he had a teddy bear, he said ‘nobody in all my life has ever given me a teddy bear.’ It’s just those little things we can do so easily that will give that hope to them.”

The OUTpost family celebrated its second Christmas together in 2020, with donated catered meals on Christmas Eve and Christmas Day.

“We watched movies,” Corey says. “I’m like that dad that says ‘no you can’t touch your presents yet.’ I had to come in early to get the stockings ready, put more presents out. When they walk in they‘re like, holy crap, so excited.”

Donated food and presents from the community made creating a family space for the day easier.

“It was pretty incredible for us to not have to find money to do that,” says Corey.

“We come together play games, hang out, try to give everyone a sense of belonging.”

OUTpost is always grateful for any donations from the community.

“We’re so thankful. It can be anything, cookies, brownies, it can be that small,” he says.

“ It doesn’t always have to be about money. Paper towels, socks, jeans and t shirts. By all means we’ll take it. Gift cards are always a good thing too.”

Covid caused some complications in 2020 – only 15 people, including staff, were allowed in at a time and social distancing was required. Some youth had to wait at the door until there was enough space for them

“But we made it through, says Corey. “Some stayed for a little and then left, but a core group about seven or eight stayed the whole day.”

The pandemic has put further stress on a population that was already exceptionally vulnerable.

“It was super stressful for everyone already, given that a lot of our youth have mental health issues and now you’re throwing in the pandemic, which for someone with schizophrenia or something like that, it’s really hard,” says Corey.  “We did see an increase in substance use and suicidal ideation. That was a big challenge for us. It has quieted down a little bit but for a while there, I was doing two to three suicide interventions a day. We did lose a few youth as well.”

Corey knows that the work being done at OUTpost is changing lives.

“Not that long ago, a youth came in who was pretty rough and not doing well. In and out of jail. After he came through this door, his life turned around.”

This young man returned to OUTpost for a visit recently, to say thank you.

“He grabbed me and gave me a big hug and said ‘I would not be alive right now if it wasn’t for you, and you just being there for me’,” says Corey. “That’s a common story.”

While the success stories are there, he still worries about the youth who aren’t getting what they need.

“It makes my heart sad. How many lives are we not touching and serving, who don’t even know about us,” he says.  “But I do know the ones that have walked through the door have found hope.”

OUTpost is located at 11725 Jasper Avenue. Financial donations can be received online here. 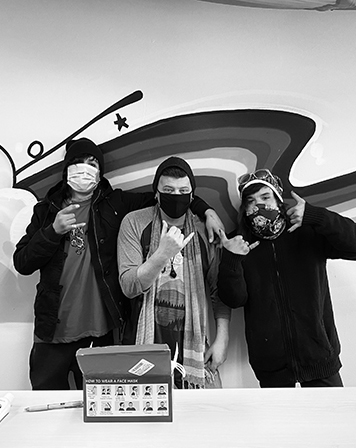