Substance abuse can cost people everything, including their lives, and a local traveling exhibit is hoping to bust the myths around who addictions affect.

The local  project was inspired by the Opioids Don’t Discriminate project out of Strathcona County in 2018.

“A couple of  people had seen the Strathcona County exhibit and thought we should do something like this in Edmonton,” says Sofia Alani, Project Manager at REACH Edmonton.

“It was very well done. They won a ton of awards and received a lot of positive feedback.”

The Edmonton project is a partnership between the City of Edmonton, University of Alberta, MAPS Alberta, and a wide array of health, education, and social serving partners.

Faced with the choices of bringing the existing exhibit to Edmonton or recreating a similar one, it was decided to create a new campaign with a wider scope.

“We decided to focus not just on opioids,” says Alani. “Substance use looks many different ways in Edmonton, with high use of meth and alcohol as well.

The stories that are shared through the exhibit are based on real stories from the community, and were created in collaboration with six storytellers, making their stories the focus of the exhibit.

“We wanted to focus on the narratives and peoples’ lived experience rather than the specific substance,” says Alani. “Our main focus was on developing empathy for those who use substances, to create points of connection where people reading these storytellers’ experiences could see themselves. We also wanted to include information on how substances affect the brain and how addiction is a form of mental illness with many contributing factors. It’s not a moral failing on someone’s part. We focused on stigma vs. connection and community vs. isolation. All those things that look at addiction through a holistic, community lens.”

Essentially, the exhibit was co-designed with the storytellers who shared their experiences.

Over the two-year process of creating the project, one of the main goals was ensuring that those who were willing to share their stories had a sense of ownership in the exhibit.

“We wanted to make sure we told the stories in a respectful way and that the storytellers had agency and say over how their stories were shared. The co-design process was one of the most amazing parts of the exhibit for me.” she says.

Planning a public exhibit in the middle of a global pandemic, however, presented special challenges.

“Obviously Covid was the biggest challenge,” says Alani. “It delayed the exhibit for a year, and prohibited meeting with the committee and storytellers in person.”

The process of creating the exhibit was also educational for the organizers.

“I learned a lot about the importance of creating connections,” says Alani. “Every storyteller had a point in their journey where connection was a deciding factor in their recovery. Through them sharing their vulnerability and strength with us, we hope that we will create more connection and more empathy for those who use drugs. We hope that this will be a good example of the importance and responsibility of community care..”

After launching at the Edmonton Public Library in November, 2021, the exhibit is now headed on the road, and is available to be booked as a traveling exhibit.

More than 400 people filled out evaluations after seeing the exhibit in November, and the feedback was exceptionally positive.

Alani is hopeful the exhibit will continue to build empathy across the communities it visits.

“The  biggest thing we want to build is empathy and compassion for people,” she says.  “Understanding that when you see someone with substance issues, there’s more to it. There are so many interconnected issues.”

For more information about the exhibit, including how to bring it to your community, click here. 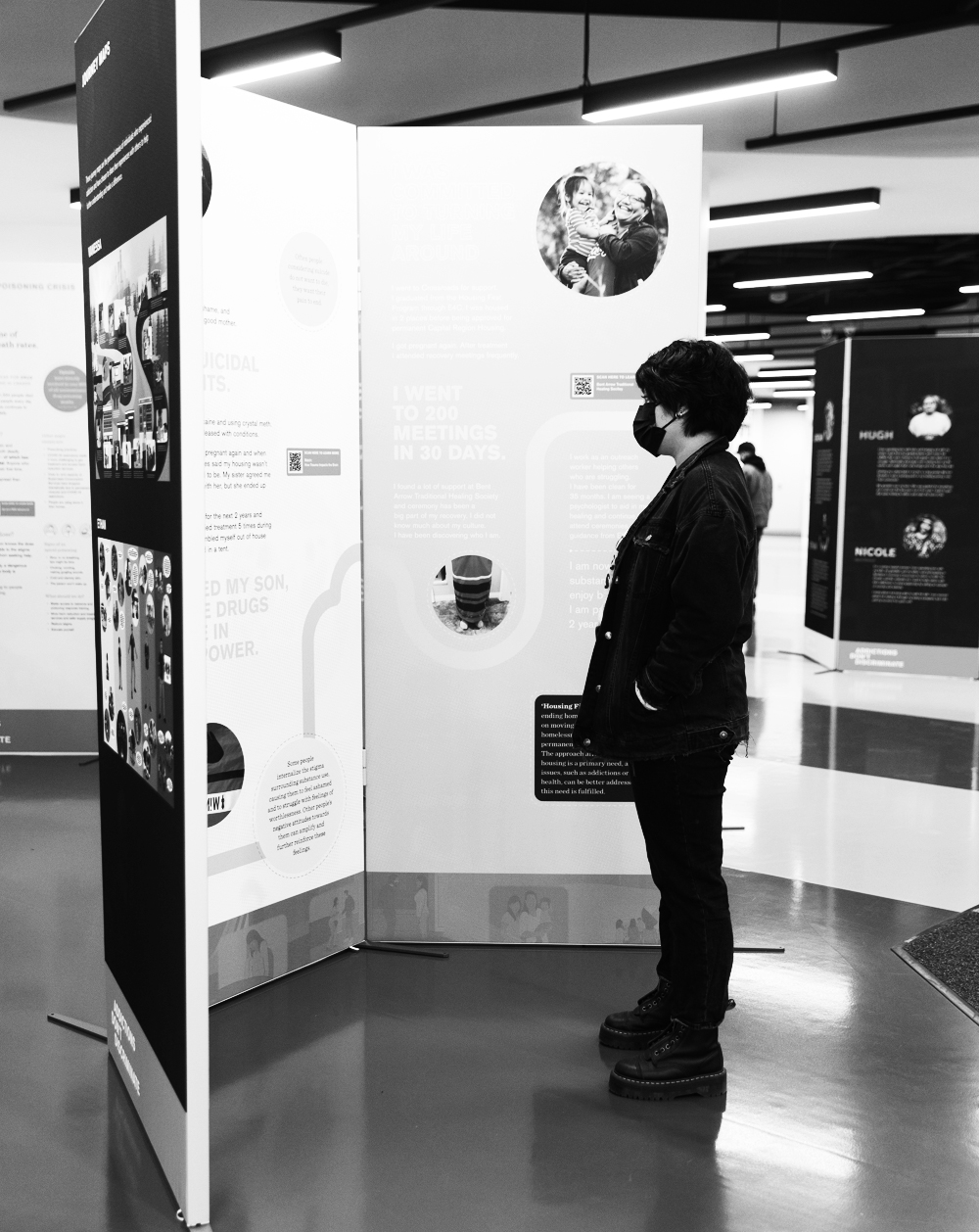