When someone in Alberta experiences a hate incident, where can they find support? What can bystanders do to help?

These are some identified needs that the Response Model to Hate Incidents in Alberta aims to address.

The Response Model for Hate Incidents in Alberta was an initiative led by the Alberta Coalitions Creating Equity (CCE) with support provided by the Alberta Human Rights Education and Multiculturalism Fund. The five municipalities of the CCE (Wood Buffalo, Edmonton, Red Deer, Calgary, and Lethbridge) and their surrounding areas worked together to develop a mechanism to provide service providers with tools and guidelines to effectively respond to incidents of hate.

“In our work with CCE, we found that a lot of people were not reporting hate incidents because they didn’t know where to go for support, or they weren’t sure they were being discriminated against because they’re not aware of the law in Canada and what a hate incident looks like, or because they think nothing is going to be done after the report, among other reasons” says Krystell O’Hara, who was the CCE Coordinator for Wood Buffalo during the creation of the model.

“To gather information we decided to launch a survey to identify where these incidents happen, what populations or demographics are affected, so we asked a series of questions for us to be able to develop a tool that's for the community and by the community,” she says.

“We used a human-centred design process to develop a tool that could help people do several things.”

The CCE Response Model to Hate Incidents aims to be both an educational resource and an easily accessible tool for people who may be the target of a hate incident.

“Safety looks different for every person, so we understood having different ways for people to seek support was important,” says Krystell.

The Response Model includes a flowchart to help victims reach out for support, and navigate the experience in the safest way possible.

In addition to educating the public and victims, it contains specific guidelines for service providers that support people who have been involved in a hate incident.

“We got a lot of responses from service providers saying they didn’t know how to properly support people experiencing hate,” says Krystell. “What was happening was, someone would report an incident, and they’re sent agency to agency, and that person has to re-share the traumatic story over and over without any help because the service providers didn’t have trauma-informed guidelines or were unaware of their own unconscious biases.”

The guidelines offer direction for service providers and also peer-to-peer support in how victims of hate incidents need to be supported in a trauma-informed way.

Krystell is hopeful that the model will be used effectively in communities across Alberta.

“Now we want the local communities to utilize the resource and to develop their own more localized responses,” says Krystell. “We included recommendations for different targets based on what we’d heard from people but also what is being done by the American organization, Not In Our Town, because they’ve been implementing a response model for a long time.”

Krystell is hopeful the Response Model will lead to different organizations and communities mobilizing and responding to hate incidents in an effective way.

“I think if people were more aware of this, people in general and also service providers would be able to support people in their communities in a trauma-informed way,” says Krystell. “So we’re trying to get the word out now.”

The complete CCE Response Model to Hate Incidents can be found here. 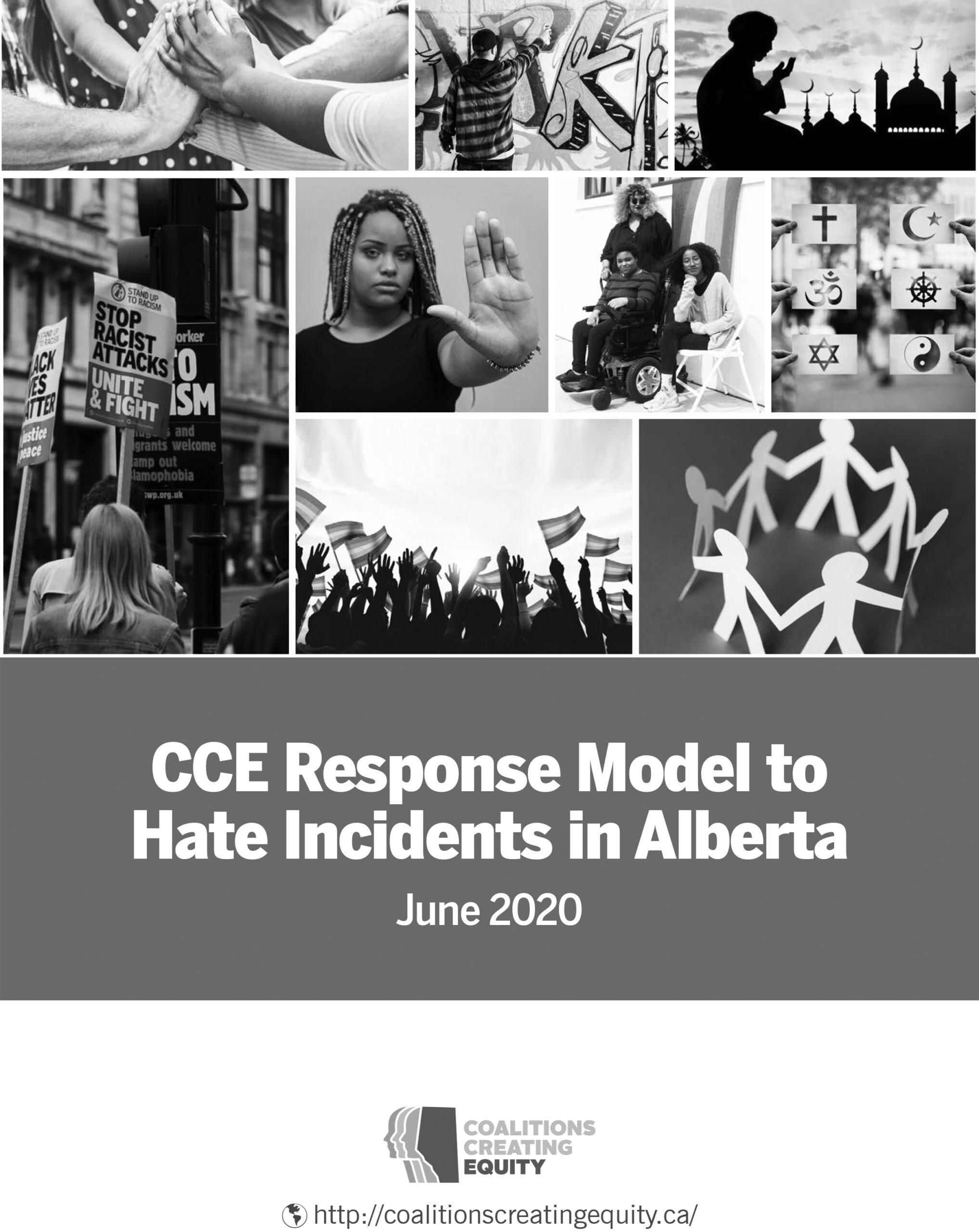